A new hope for the cryopreservation of ES and iPS cells

Primate embryonic stem cells and induced-pluripotent stem cells are extremely sensitive to cryopreservation which presents many difficulties when compared to murine or other cells. At present, the vitrification method is considered adequate for primate ES/iPS cells although the slow-freezing method using DMSO has been popular for a wide variety of cell lines. Vitrification is the rapid cooling of the freezing media to a glass-like crystalline state. The vitrification method requires impeccable timing, a high level of skill, and still can yield poor results. In addition, this method shows sensitivity to dry ice transportation. To address these problems, the new freezing medium BambankerTM HRM has been developed. 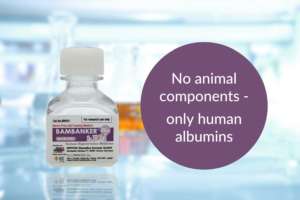 What makes BambankerTM HRM so special?

The Cell freezing media BambankerTM HRM contains no bovine serum albumin, which can sometimes lead to cell differentiation. Furthermore, there are no animal-derived material which improve storage and survivability of primate ES/iPS cells while greatly simplifying the protocol. 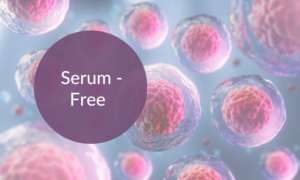 All BambankerTM products are produced with no serum. Cryopreservation media which contain sera have the disadvantage of fluctuations in recovery rates and undefined composition. Reproducibility of experiments with cells which were frozen in a serum-containing-medium, could be affected by lot-to-lot variation of the serum since the composition and concentration of proteins and other biological molecules varies with each batch of serum. This may result in issues when thawing and using cells from such serum-containing media. Breathe easy, as every ingredient of BambankerTM is precisely defined so that you can be confident that cells stored at different times will all behave and recover similarly.

There a four different version of BambankerTM: 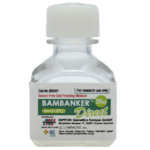 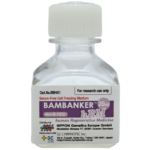 Comparison of the cryopreservation efficiency for human iPS cells

Human iPSC 201B7 cells were cryopreserved in BambankerTM HRM, in a conventional vitrification medium or in a 10% DMSO/culture medium. After 3 days, the cells were thawed, according to protocol, and then plated. In case of 10% DMSO containing medium only small colonies could be recovered what suggests a small survival rate, while with BambankerTM HRM it was possible to recover large colonies with almost the same size as achieved with vitrification freezing preservation solution. These results indicate that the same storage efficiency can be achieved with BambankerTM HRM as with the vitrification preservation solution with the additional advantage of an easier handling.

Storage efficiency of BambankerTM and two other commercial preservative solutions (supplier T, supplier S) for fibroblasts from common Marmoset was compared. Fibroblast were cultured in a 6 cm petri dish until a confluency of 90-100%. The cells were frozen for two months at -80°C.

24 and 48 h after thawing photomicrographs were taken for every preservation solution. The percentage of dead cells was determined. The highest survival rate was achieved with BambankerTM HRM, followed by Supplier Ts storage solution. Supplier Ss storage solution achieved the lowest survival rate. Only the cells which were stored with BambankerTM HRM showed a sufficient number so that they could be directly used for iPS cell induction.

Comparison of the cryopreservation efficency for human iPS cells

Rated 4.8 out of 5 based on 5 customer ratings
5 reviews for Bambanker HRM